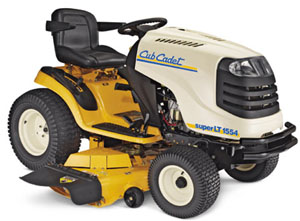 I recently bought a Club Cadet SLT 1554 garden tractor. I had a John Deere 455 diesel garden tractor. When comparing the two tractors there are a lot of things that I like about both.

But some things that I dislike about both. I liked the power steering on the John Deere where as the Club Cadet I don't know if it was offered or not does not have it.

Another thing comparing the two tractors is the option of the mower deck. On the Deere you could lift the mower deck up with a lever where as on the Club Cadet is on one level unless you want to manually move it.

Which means you have to stop turn it off and move the mower deck manually. On the positive note for the Club Cadet, I like the quick attached mower deck. If you need to take it off for any reason, It is much simplier than the John Deere.

It also has the deck washing system which is very helpful cleaning the deck instead of either taking the whole deck off or putting it up on some blocks to clean it.

I haven't had it that long but over all I would recommend the Club Cadet to anyone for the price and the performance.