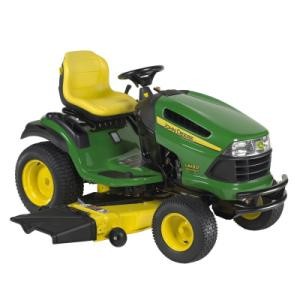 This is my second Deere. My first was a a Commerical which was very good, sold me on the Deere. It lasted from 1992 until 2007. It did more than cut grass, it cut, mulched and moved even pine straw.I ran over anything I could get between the wheels. Service was vital. If you use, but don't abuse the maintence.

My Second Deere was a LA/150. I bought in 2007. It was not a Commerical. First The tires keep going down, mainly the front tires. Then the right front tire acted like it was pidgon toed to the outside. Ask the dealer he said it could be a steering rod or a bent axel,(OK)Wanted me to bring it in or break it down and we could compare parts. His new to my old.

Then it wore my other front tire out. Of course, I bought new ones. Got up this morning to see if I could get one last cutting before break down, that was a joke. After only about 8 or 9 passes, the right tire squated like an axel had broke, further inspection revieled, not so lucky, the front center cross beam had broken in half. Deere you have cheated on me enough.I will not mate with a deere anymore.