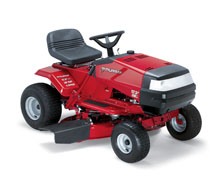 This is a fairly good lawn mower, particularly for the price... it's lasted several years for me, with some problems, but nothing too terrible. I've had to do a little tinkering, but nothing too dramatic.

Probably the only really frustrating problem is the frequent need to re-adjust the deck to mow in a level manner. Since it is hard-mounted to the frame, and not a "floating" deck, I have to change the level of the deck several times each time I mow, which is only a problem because I have a bit of an odd ridge in my backyard. It's not difficult, or even time consuming, but when my son mows he always forgets to do this and we end up with some weird spots of really tall grass and some spots that are nearly shaven off...

Since it's a standard tractor style mower and not a newer, zero-degree turn model, there's some obvious turn radius issues in tighter spots, but I really can't forsee it being a terrible issue with anyone who would be looking for something in this size anyway. I'd avoid it if you have a lot of curved landscaping, or you could just use a weedeater for that.

Overall it's a good deal, since there's minimal tinkering to be done, and it's lasted so long. I'd recommend it to anyone who doesn't have too much to mow, but at the same time has more than would be comfortable for a walking mower. It was definitely a good buy.

Join in and write your own page! It's easy to do. How? Simply click here to return to RIDING mowers - murray.